McLaren's cut and carve in the heart of Victoria

McLaren Construction has applied its experience to a ‘cut and carve’ office redevelopment project near London’s Victoria Station. 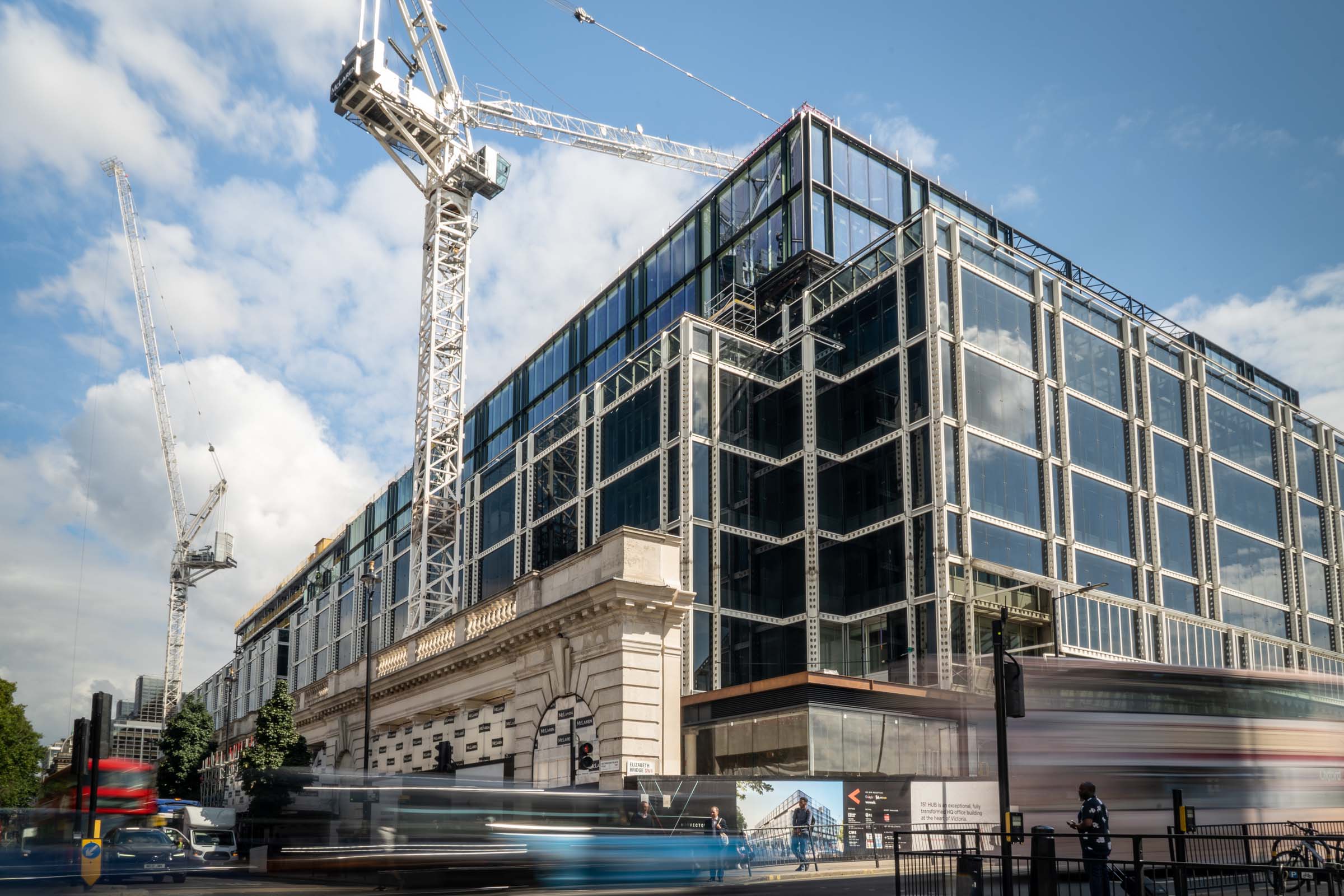 Hub Victoria is a commercially-led, mixed-use development, which will see the upward extension and refurbishment of two existing five-storey office blocks. Through the addition of a further three storeys and reconfiguring the internal space, the new development will offer an extra 10,000 square metres of office space without straying beyond its existing footprint.

It is a difficult task for the McLaren team, made tougher by the fact that the existing buildings have to stay in operation and occupation throughout the work. “There is no doubt that it makes the project more complicated,” says Darren Gill, managing director of McLaren’s London business. “But in congested city centres, where development land is at a premium, these schemes are the future. The only way is to build up, and by keeping tenants in situ we can mitigate the impact on revenue streams.”

Managing the complicated build process is McLaren project director Fraser Tanner. He agrees that maintaining occupancy has heightened the challenge. “There are two buildings on the site, one of which is fully occupied and has remained so throughout. Keeping the services and reception areas fully working and available has been challenging, to say the least. It is what has driven this build.”

The new Hub Victoria is based around two 1990s-built office buildings, separated by a central, landscaped square and glazed walkway at ground level. Each building features a large, central atrium of glass. McLaren is connecting the two buildings with a bridge over a central square and a new, covered atrium at the level of the old roof.

The team has used a steel-frame system to erect the three new storeys spanning both buildings. It launched them from the existing concrete-roof slab level – a process hampered by the steel sections that needed to be carefully threaded through and around the existing mechanical and electrical service ducts, pipes and cabling.

The mechanical and electrical (M&E) installation – including air-conditioning units and boilers – is being checked, tested, recycled and kept. This recycle, update and reuse philosophy requires a robust checking and risk-mitigation process, but is fundamental to the scheme’s success. “The M&E integration was our biggest challenge,” Tanner says. “Having to build around existing services and ensure none of those services were lost became increasingly complex as the build went on.”

The original buildings sit on a reinforced-concrete podium slab above an approach to Victoria Station. Given its relative youth, the steel-framed building’s original structural design calculations are still available, and it has been easy to prove that the new, vertical extension will not have an overt impact on the loading capability of the existing podium and foundations. Some existing columns have been strengthened, but the lightweight, steel-frame extension – based on 305 universal columns set out on a 7.5-metre grid – is launched directly from the existing roof slab using a simple connection plate.

Keeping the rain off

Throughout this hot, dry summer, the McLaren team has kept a close eye on the weather forecast, the potential for water leaking through into the Network Rail asset beneath the building has also been a concern.

With water-management teams in place, the building’s waterproofing solution has been adapted as work has continued, with temporary protection placed during the work, and temporary façade sheeting and waterproofing to the birdcage scaffold within the atrium, enabling cladding connection and core work to continue whatever the weather.

“Obviously, there are potential issues as we open up the structure to connect lift cores and columns, so we’ve had to be vigilant around our waterproofing regime. Thankfully, there have been no issues so far,” says Fraser Tanner. 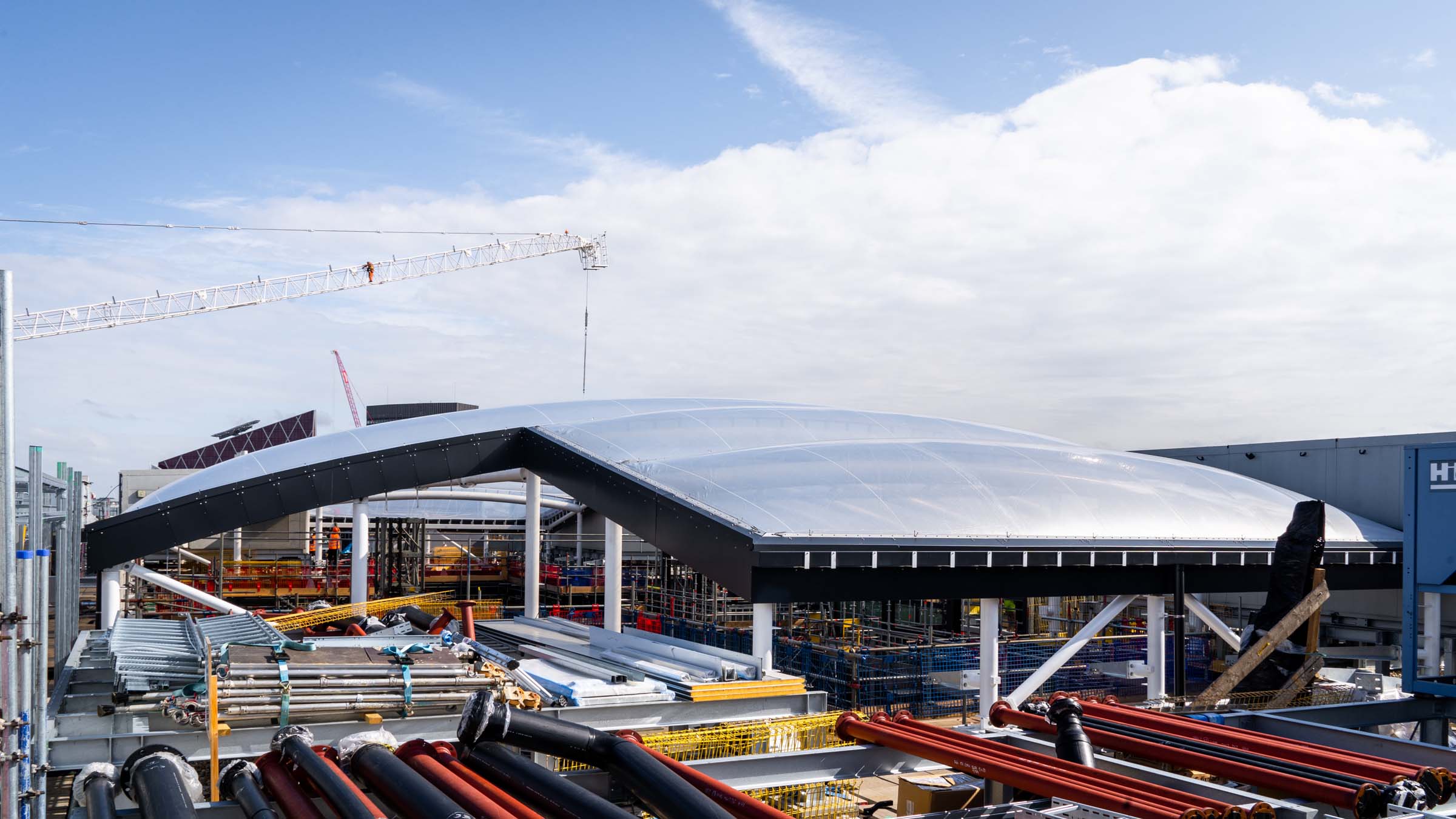 Across the project, the team has used three 31.5-metre tower cranes with 65-metre jibs and an overall lifting capacity of 12 tonnes. Two of these were located alongside Buckingham Palace Road, which runs along the site’s western boundary, with the third in the central square.

To alleviate the danger of loaded cranes damaging the podium and potentially the rail asset into Victoria, the team developed an offset crane-base design. This fabricated-steel grillage provides a tie-in with the column layout of the Network Rail podium-support structure at slab level, ground floor and the base of the crane, which is offset some 2 metres. This enables loading from the crane to be transferred directly through the podium and into the main railway asset structure beneath.

With a 12-tonne capacity at 65 metres, this called for significant input from the temporary works team to develop a base capable of handling this potential loading. The crane’s 8-metre by 8-metre chassis featured 84 tonnes of ballast, with each base boasting a steel grillage with an offset top frame and an additional 55 tonnes of kentledge to counterbalance that offset.

It is not the only area where the temporary works team has been busy. Inside the main central atrium, a forest of scaffolding and access hoists has been designed and installed – at some points mere millimetres from the tenanted offices.

Above the central square, the new atrium is clad with a pressurised ethylene tetrafluoroethylene (ETFE) roof system, similar to that used to create the domes at Cornwall’s Eden Project. The double-layer system stretches across steel roof trusses spanning 25 metres. The light weight ensures the design does not affect the existing structure.

There is some time to go before the completed building is handed over to client Gaw Capital in April 2023, and doubtless more challenges for the project team. But, for McLaren commercial office sector divisional director Domonic Egan, this scheme could prove the first of many. “With fewer commercial development sites available, I think projects like this, where the tenant remains in occupancy, maintaining the developer’s income stream will become commonplace. This is a repeatable solution for London and we’ve proven we are more than capable of carrying out such complicated work,” he says.

To cut waste, improve the building’s carbon footprint and save cash, the team has developed a regime to test, validate, relocate (where necessary) and recommission equipment.

“It is part of the client’s strategy. Lots of it is relatively new, but we have to be vigilant through our validation regime and make sure all parties are agreed. It is potentially one of the biggest risks on the project,” says Darren Gill.

Recycling and reuse is behind the building’s targeted BREEAM ‘Excellent’ rating.

Some 99.94 per cent of the waste produced onsite is recycled and carbon emissions will be significantly lower than for the original building, thanks mainly to efficiencies driven through the new M&E installation. Photovoltaic panels installed across all available areas of the roof will reduce overall carbon emissions by 18 per cent.

“Our supply chain has been superb throughout. They have understood what we are trying to achieve here and have been happy to work with us,” Gill says.